After some testing I find some things I want to address. First of all since my Targus iPad keyboard uses scancode 139 this conflicts with the menu key on my Samung Galaxy S III so when remapping scancode 139 to Back (see tutorial 2) I also remapped my menu key on the phone.

This I will address using the Device ID filter in the Advanced settings. For most phones the buttons on the phone uses device ID 0 or a negative number. For this the default setting will make sure they are not affected by the remapping in External Keyboard Helper. However for my Galaxy S III running Android 4.1.1 this is not the case.

The first step is to use the Debugging screen to find out what device ID the phone buttons are using so I enter Advanced settings and then Debugging. Pressing the menu button on the phone both confirms that it uses scancode 139 and that it uses device ID 5.

So now I now that I don't want External Keyboard Helper to touch anything that has device ID 5 or lower so I set the Device ID filter to 6.

I also find the keyboard repeat to be a little bit to sensitive for my taste so I change the delay to Slight delay.

I also want to be able to switch between my custom layout (based on the Swedish layout), the Xperia Play layout and no remapping at all so I setup a Language-switch key. 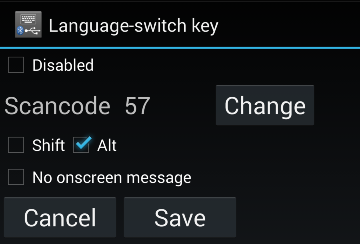 I also check that I want to use a third layout.


I then choose the Xperia Play layout as my second layout and let the third keep it's default setting (No remapping).